The former senator representing Bayelsa east, via his official Twitter account, revealed three of his “children” are in the BBNaija and that he wants viewers to keep them in the house.

He shared voting photos of Prince, Erica and Kiddwaya and his “children”.

“Three of my children are in the @BBNaija house, and I have real love for all of them. Let’s keep them in the house. #BBNaijaLockdown” he wrote. 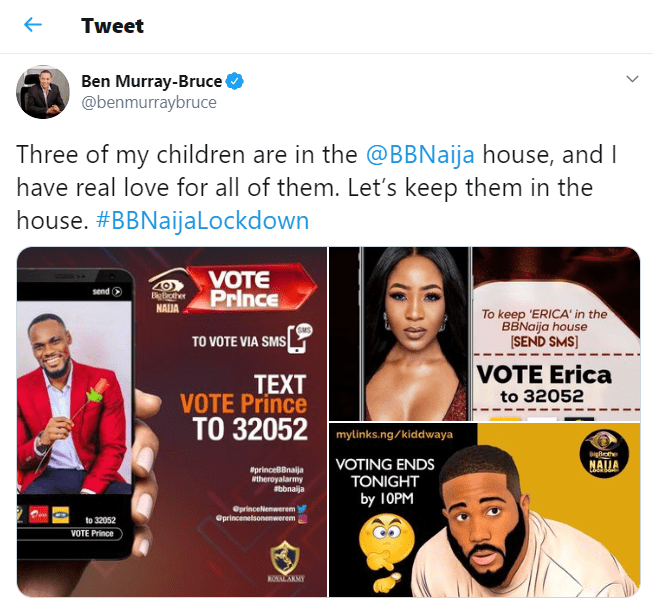 According to some reactions to the tweets, some people are saying that Bruce is supporting Prince and Erica because they were models who competed via his platform.

#BBNaija: Watch Moment Laycon And Kiddwaya Embraced Each Other

Excerpts from ‘What if?’ the movie premiere in Abuja

#BBNaija: My boyfriend has refused to pick my call – Nengi reveals

Nollywood actress, Ada Ameh, notably known for her role as Emu in the family sitcom, The Johnsons, has pleaded with president...

Popular Nigerian Disk Jockey, DJ Neptune has called out president Buhari to address the citizens of Nigeria on or before...

Presenter Morayo Brown and some of her colleagues are reportedly trapped as TVC is being set on fire by hoodlums from the...

Amidst the viral protest against police brutality and the shooting at Lekki Toll Gate yesterday, reports have it that Oyingbo...

Nollywood actress, Ada Ameh, notably known for her role as Emu in the family sitcom, The Johnsons, has...