BBNaija’s Vee Reacts After Being Called Out For Owing A Fashion Brand N1.9Million

Vee, a former Big Brother Naija housemate, has reacted on social media after a fashion business accused her of owing N1.9 million following the termination of her ambassadorial arrangement.

AbujaNow previously reported that the firm called out the reality TV star’s harsh attitude during the product photography in an Instagram post. Click HERE to read.

Vee had taken to her Instagram page earlier today to revealed that she would no longer be working with the clothing line company.⁣

In her words, “I am no longer associated with Zeena and Zara brand, regard every image by me shared by them as false advertising and only do business with them at your prerogative.

⁣Shortly after her post, ⁣the clothing brand took to social media and shared:

“Apparently Vee paid 2million out of the 2.5m she was given for the deal she refused to honor. However, the shoot including the items she took cost about 1.4million which she insisted on not paying back,” they responded on their Instagram page.⁣
⁣
She was advised to refund a total sum of N1.9M as the balance of the money and items in her possession.⁣ Now she refused to pay for the loss incurred for the shoot, not forgetting that she made away with items worth 400k including the 500k balance from the ambassadorial deal payment, all tuned to about a total of 1.9million.

However, contrary to the brand’s claims, the reality TV personality disputed reaching out to the clothing company and asking an ambassadorial deal in a message uploaded on the microblogging platform Twitter.

According to Vee, the brand told her that she would have to wait two weeks for the brand cargo to arrive once the payments were agreed upon.

According to Vee, she was forced to use hair from a different brand for the product shooting, which was not part of their contract agreement, and she agreed so she wouldn’t be labeled problematic.

On the second day, however, she refused to use the hair, which became the source of the trouble. She went on to say that she was shown a video and that she urged the company to work on it, and that the brand owner began screaming tantrums at her. 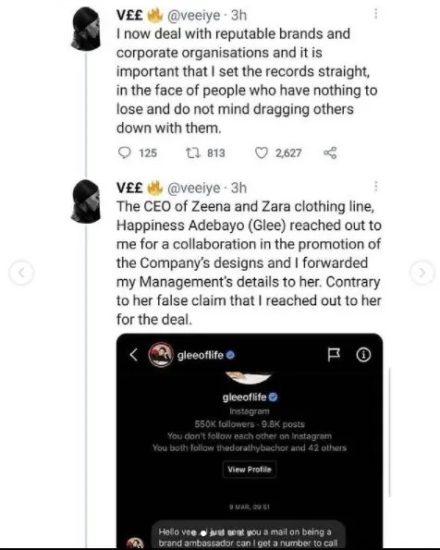 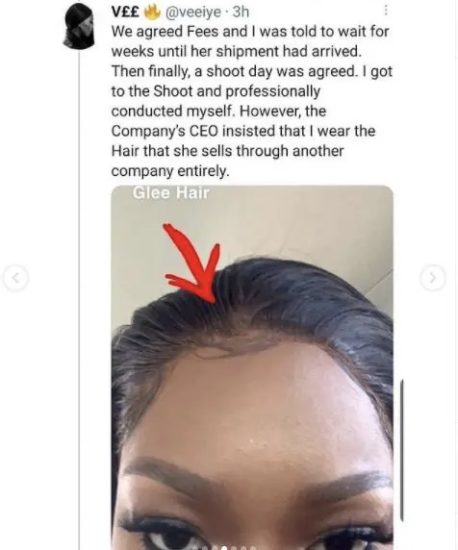 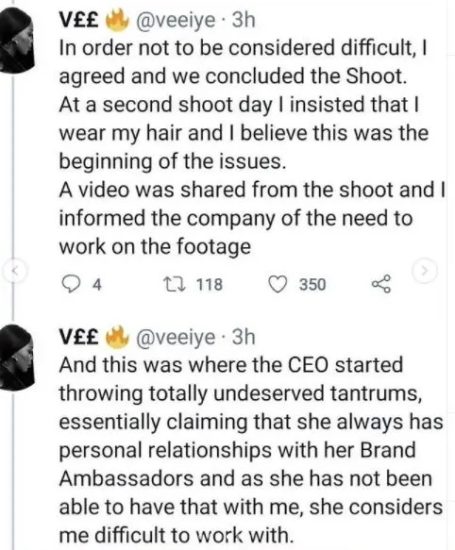 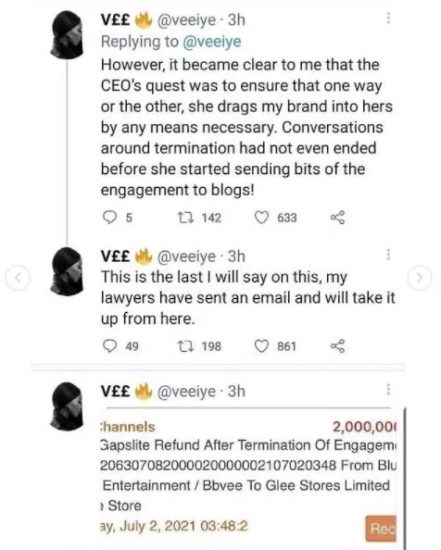 Nobody Can Ban My Movie, Oko Iyabo – Yomi Fabiyi Insists

Uche Jumbo’s Son, Matthew Insists That He Loves His Mother More Than She Loves Him

#BBNaija; ‘It Was So Hard For Me Not To Sleep With Kiddwaya Last Night’ – Erica Tells Tolanibaj

Emmanuel is one of the BBNaija 2021 housemates currently competing for the grand prize of N90 million in the Shine...

BBNaija female housemate, Afije Rosaline Omokhoa aka Liquorose, is not fresher to the screens. She is known...