Controversial actress, Cossy Ojiakor’s fiance, Abel has called off their engagement which is barely 4-months-old on grounds of domestic violence.

According to Abel, he took the decision after Cossy got into a fight with him after getting drunk.

He revealed he got bitten from different corners.

See what he posted on social media below;

He wrote; “Finally, its over between Cossy and I after she got in a fight with me after getting drunk.

“This is what she did to me, got bitten from different corners.” 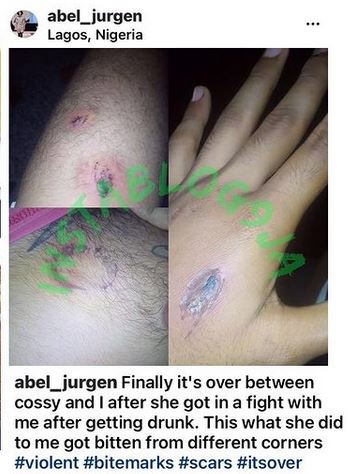 Cossy is yet to respond.

The last time Cossy was in the news was during the End Sars protest that went viral in the country back in October as she celebrated her birthday at the protest venue.

I Have No Intention Of Getting Married Again – Angela Okorie

Actress, Iyabo Ojo Mourns As She Loses Her Mother