DMW boss, Davido has congratulated Starboy Wizkid on his new album, Made In Lagos, which dropped today, October 30.

The album has since gone viral.

This is coming after one of Davido’s crew member, Prince Habeeb Uthman, popularly known as Obama-DMW, threw a shade at Wizkid, calling the album “wack”.

Davido has now taken to Twitter and Instagram to show his colleague love by posting the album. 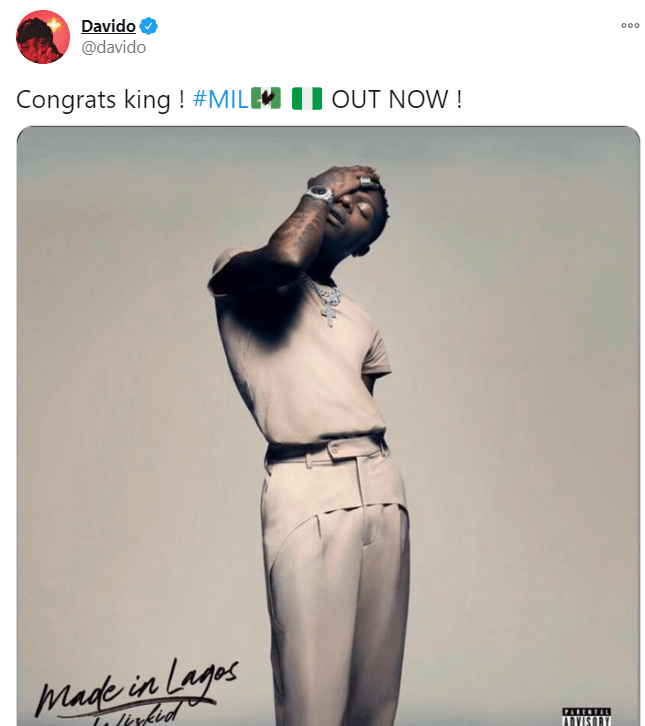 Few days ago, Nigerians on Twitter dug up a tweet from 2011, of Davido pleading with people to support Wizkid’s album.

Recall that earlier this month, Davido in a new interview with Ebuka, revealed that he saw Wizkid as a motivation which gave him the conviction that he could also make it in the industry.

Actor Yul Edochie And His Wife Celebrate 16 Years Of Marriage

Watch How Comedian, Taaooma’s Boyfriend Proposed To Her On A Rooftop In Namibia (Video)

BBNaija Star, Ike Onyema Reflects On His Failed Relationship, Reveals Why He Is Now Single

Nigerian Gospel singer Tope Alabi has penned down an unreserved appreciation for her fans and everyone who stood for her...

TV host and media personality, Nancy Isime have finally opened up to her fans about her current relationship status. In an...