DJ Cuppy has threatened to sue Afeare Israel, who is better known as Israel DMW, a personal logistics manager to Davido, over claims that she did not pay rapper, Zlatan Ibile, for his collaboration in their 2019 hit song, “Gelato”.

Cuppy revealed that no contractual agreement regarding the song “Gelato” was breached, as confirmed by her lawyers, adding that she is suing Israel DMW for libel defamation.

Recall that DJ Cuppy had shared a tweet where she opened up about her brief relationship with Zlatan. In her tweet, Cuppy wrote that the rapper blocked her on Whatsapp and Instagram about ten months ago. Following Cuppy’s tweet, some fans called on Zlatan to address the issue which he didn’t do until he recently claimed not to know DJ Cuppy in an interview.

After Zlatan pulled the “I don’t know who she is” card, Isreal DMW shared a post on Insta story, hailing Zlatan for “flushing out a full fake friend like cuppy” and accusing Cuppy of “using his head, all in the name of my papa an Otedola.” Isreal added that Zlatan did not get “one kobo” from his hit collaboration “Gelato” with DJ Cuppy.

Isreal went on to accuse DJ Cuppy of taking Zlatan to Abuja for a fundraising event “where she made billions of naira and didn’t even remember zee for one kobo till tomorrow. No accommodation, no feeding.” He claimed, “Zlatan had to use his own personal money at Transcorp Hilton to carter for everyone including me.” Isreal ended the lengthy write-up with “Dis na 2021 abeg”. 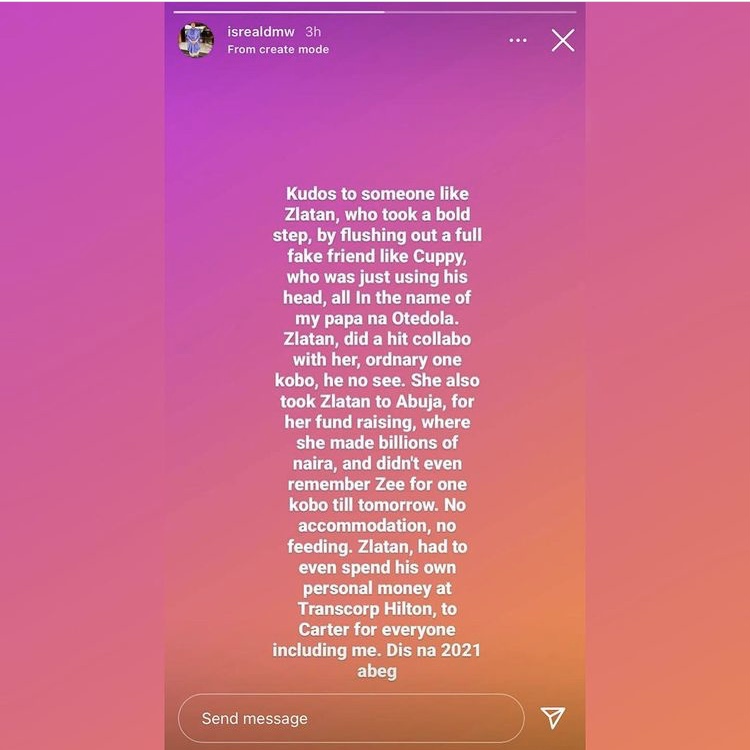 Cuppy made the announcement on her official Instagram page with a still photo from “Gelato” music video, and she captioned it:

There have been no breaches of my contractual agreement regarding the song #Gelato as confirmed by lawyers… However, as @IsrealDMW publicly inaccurately declared I owe an artist money, I am suing him for libel and defamation…

See you in court Isreal.

Davido Might Be Starting A Bitcoin Trading Company Soon

These New Photos Are Proof That Cynthia Morgan Is Back & Better

Read How Gedoni Expressed His Love For Khafi On Her Birthday

Big Brother Naija ex-housemates, Tboss and Ka3na are presently battling fiercely over who should be addressed as the ‘Boss Lady’....

Big Brother Naija ex-housemates, Tboss and Ka3na are presently battling fiercely over who should be addressed as...