Controversial Nigerian Journalist, Kemi Olunloyo has reacted to the death of Ibidunni Ighodalo, who died on yesterday.

Yesterday, news broke out of her death, it was reported that the ex-beauty queen died of cardiac arrest while in her hotel room in Port Harcourt.

Reacting to the news, Kemi Olunloyo called on the Police to investigate the death of the spouse of Pastor Ituah Ighodalo, the head pastor of Trinity House Church, as she questioned the fact that she died from cardiac arrest.

Kemi claimed that Ibidun Ighodalo died of either suicide or murder.

Ibidun Ighodalo just became my online friend this February 2020. She said she had a foundation, always checking on me in IG DM. I have screenshots. Why will her Instagram page be deactivated by anyone? @PoliceNG must Investigate how she DIED in a hotel room #Kemitalks

There is a wave of poisoning deaths all over Nigeria. Pure nonsense! The Niger Delta Commission guy was also poisoned. Did someone poison her in the hotel? I want to know her last meal, @Facebook legal dept will tell us what time her IG was deactivated and from what location

There must be NO COVER UP in her death. Wanna see her autopsy. 41yo women do have cardiac arrest SECONDARY to what though? To deactivate a page then cardiac arrest signifies SUICIDE, other way around MURDER. @PoliceNG get to work
@GovWike pls open an investigation #kemitalks

The hotel in Port Harcourt needs to be SEALED as a potential crime scene. The entire kitchen staff & management need to be detained and interviewed on what she ate before that cardiac arrest. Someone died in there. SHE MUST NOT be buried YET! #kemitalks

Ibidun Ighodalo’s family needs to be interrogated on who ran her Instagram pages. The Nurudeen Lawal guy who travelled with her to PH must be detained for questioning. Did he run the foundation page along with her? Why isn’t an obituary posted on that page.
@instagram @Facebook

Rest in Peace Ibidun Ighodalo. I was just getting to know you. I’m an Investigative Journalist and your DEATH IS SUSPICIOUS. @PoliceNG @GovWike plssssss get to work. Segun @segalink pls read the thread. It’s a lawless country. Focus on the bigger picture. @GraffitiBMXCop DM 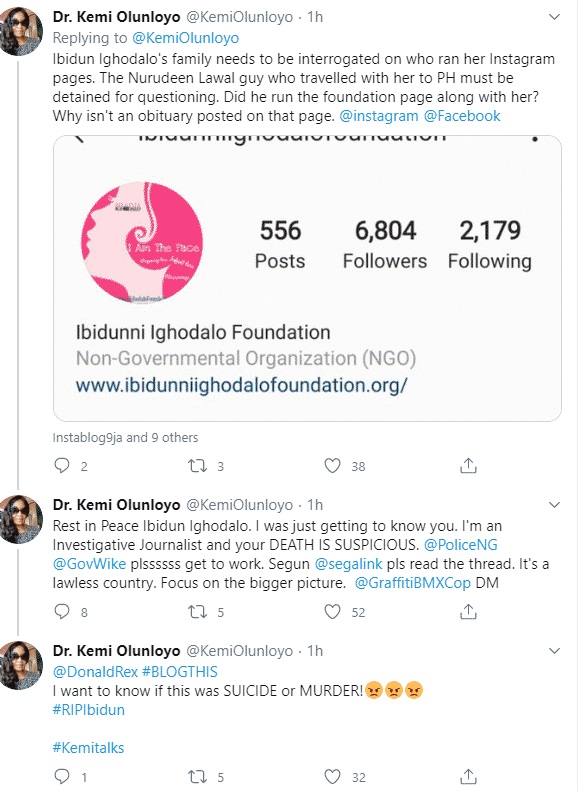 “Do You Do drugs?” – Mercy Eke Confronts Ella During BBNaija Reunion, Slams Her For Trying To Snatch Her Boyfriend Ike

Falz showed up at the 14th Headies Awards with a new hairdo. The Nigerian rapper, songwriter, and actor has gone...

Sensational singer and actor, Banky W has talked about the birth of his new baby, Zaiah in a recent post...

Filmmaker, Funke Akindele shared an adorable gesture by her husband JJC Skillz while she was on a movie set. The...

Big Brother Naija's lockdown housemates, Vee and Lucy have reacted to the news about their reunion date. These reactions come...

Visiting Abuja? 7 Places You Must Stop By When You Are In The City

Banky W And Adesua Etomi Have Welcomed A Baby Boy!

Falz showed up at the 14th Headies Awards with a new hairdo. The Nigerian rapper, songwriter, and...