As Nigerians continue to clamor for total reform in the Nigerian police and an end to police brutality, actress Nsikan Isaac, has taken to social media to share the sad story of how her father and brother were killed by stray bullets fired by police officers.

Nsikan in a post shared on her Instagram page on Wednesday October 14, stated that 22 years ago, her father was killed by a stray bullet fired by a police officer. Twenty years after, her elder brother was also killed by a stray bullet in front of her family house. The actress stated that she has personally felt the pain of police brutality and is happy that a revolution is happening now. 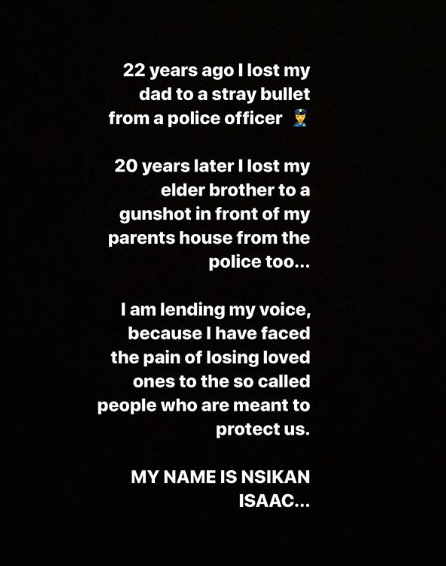 ”I HAVE PERSONALLY FELT THE PAIN!
IT HAS BEEN THERE FOR MANY MANY YEARS.
IT HAS BEEN A STRUGGLE, I HAVE HAD MY SILENT CRIES AND I HAVE PICKED MYSELF BACK UP… IT TOOK A WHILE BUT THANK GOD THE REVOLUTION HAS BEGAN!
#endsars
#endpolicebrutality #endills #nigeria” 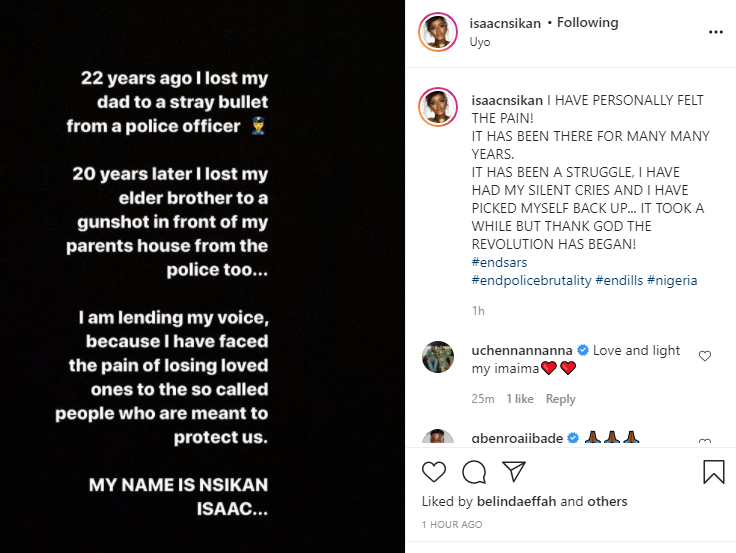 Kiddwaya Is An Unserious Person And A Player – Nengi (Video)

#BBNaija: Erica Laments About Sharing Bed With Prince Instead Of Kiddwaya

Hushpuppi Reportedly Wanted By 47 Countries As He Lists Crime Partners

9ice, His Wife, Olasunkanmi And Daughter On Vacation In Dubai (Photo)