Nollywood actress, Juliet Ibrahim has recounted how she was jilted by a former lover who player her alongside her cousin and friend. The actress joined the social media heartbreak challenge that trended all week long.

According to the Ghanaian-Nigerian screen diva, her first heartbreak happened when she caught her then boyfriend in a relationship with her cousin and friend at the same time.

Apparently, she was in love with a play boy who was rolling with her, her cousin and friend at the same time.

“I found out and I cried my eyes out,” Juliet said on Instagram. She stated that she got over him afterwards, and mended her broken heart and left him for her cousin and friend to fight over. 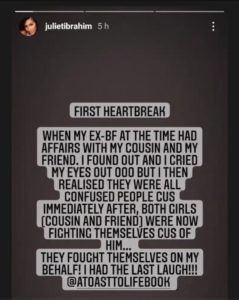 Ultimate Love: Kachi Shed Tears; Reveals How Rosie Aborted Their Baby Because Of Her Career (Video)