Nollywood actors, Ada Ameh, Kunle Remi, Onyii Alexx have reacted to the singer, Naira Marley’s insensitive statement of his plan to have s*x with a mother and her daughter.

According to Naira Marley, he hopes to have s*x with a mother and her daughter someday

Ada accused him of using his page to promote things that aren’t positive. She said she regrets the day she hugged him on the plane and called him the president of the Marlians because she liked him.

“I had to unfollow you mehn because you no get sense. You open your mouth say you wan sleep…

“Tell your mother that Ada Grace Ameh said, first of all, before you go sleep with mother and child, make your mama sleep with your papa brother. You no get sense. You be idiot. You be stupid boy.”

She asked why he can’t learn anything from the way Don Jazzy and other celebrities use their fame and social media accounts for good.

She went on to call him other names as she berated him for his sexual fantasies.

Reacting to this, Kunle Remi said Naira Marley is suffering from a serious mental health issue.

“How do you people think? I can never understand. How does one come up with thoughts like this? This is a serious mental health issue”

Alex on the other hand thinks Naira Marley is catching a cruise with a sensitive issue. Speaking further, the actress said the singer should learn to respect mothers and stop catching a shameful cruise.

“No be everything them dey take catch cruise biko… In everything, you do always respect mothers!!! Unless your mama dey mould girls then fcking try your cruise with them… Biko no give us a shameful cruise… Shout out all my Naija babes.. we deserve better”

See their reactions below: 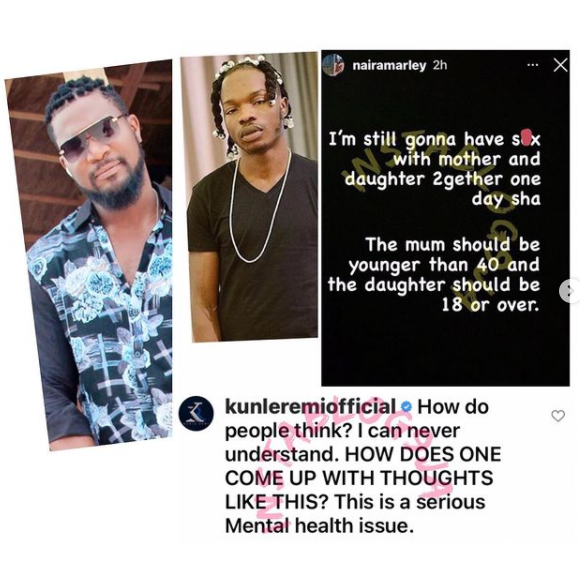 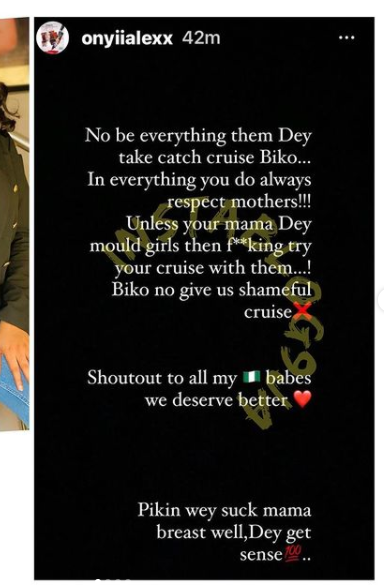 Rapper Ikechukwu Onunaku And His Partner Tie The Knot

#BBNaija: Watch Erica and Kiddwaya Reunite At A Party After The Show (Video)