Veteran actress, Rachel Oniga has died at the age of 64. According to reports, the actress who has been divorced from her husband for 19 years, died on Friday night July 30th from Covid-19 complications.

Oniga is said to have shot some scenes in a movie at Mowe, Ogun state earlier this week before her death. Other details are still sketchy at the time of filing this report.

Penning down a tribute to the deceased, Facebook user Olusegun Oshiyoye who described Rachel Oniga as his aunt wrote;

Our last conversation was not like this…Your memories will never be forgotten Mummy Olamiji…Continue to rest in peace.

Originally from Eku, Delta State in Southern Nigeria, She was born on 23 May 1957 in Ebutte Metta, Lagos State.

Rachel Oniga began her acting career in 1993, she however became a household name after starting in the Yoruba classic family drama, “Owo Blow”.

Over the years, Oniga has featured in notable Nigerian films such as “Sango”, Wale Adenuga’s television series, ‘Super story”, “Doctor Bello”, “30 Days in Atlanta”, “The Royal Hibiscus Hotel”, “The Wedding Party”, and “My Village People”.

Reacting to the news, the Africa Movie Academy Awards wrote: “Yesterday (30th July, 2021) was a black for the African Movie Industry as we lost a Veteran in Rachel Oniga (aged 64).

“Our heartfelt condolences goes out to her family, friends, colleagues & fans. She’ll be missed.” 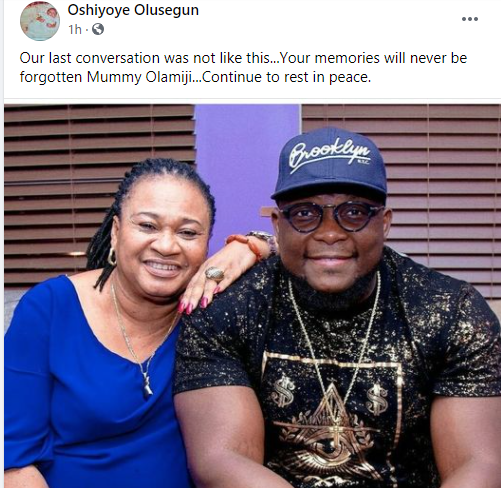 Racheal Oniga's Family Reveals The Cause Of Her Death, Says Its Not COVID 19

FULL STORY! Inside The ''Operation'' Hushpuppi Carried Out That Indicted DCP, Abba Kyari

#BBNaija: Brighto Has Been Evicted From The Big Brother House [Video]